Oh, To Be Milo the Bookstore Cat

Look at this cat. In spite of the fact that he looks like he wants to maul me for waking him up from his nap, I love him. Before yesterday, I had never seen him. In fact, I didn’t even know that he existed, and somehow, I thought that my life was going fine. Now that Milo the Bookstore Cat has entered my life, though, I truly know that every day prior to this was missing something.

That chair is his throne, and Milo the Bookstore Cat is the Lion King. We are all witness to him, live within his sleepy kingdom. His harness is not just a way to keep him from running off, but it’s also a cape, a shawl to keep him warm in the late afternoon shade. He’s the cat all cats want to be, but can’t be, because they all lack a certain je ne sais quoi.

I know nothing about Milo the Bookstore Cat, aside from the fact that he lives within the confines of Downtown Books in Milwaukee, a delightful and gigantic used book store. He runs the place, as evidenced by the fact that her litter box is just in the middle of the best-sellers aisle. Take that Clive Cussler, you ain’t shit.

Four months ago, I wouldn’t have given a second thought to Milo. I would have walked past, thought “Huh, that’s a cat”, and that’s that. My whole outlook on cats changed in July, though, when Annah and I adopted Poppy.

Pets were not something that I grew up with. My dad is allergic to basically everything, including himself, so that precluded us from owning anything, unless we were willing to build a Kevin house in the backyard for my dad to sleep in. More than that, I just wasn’t interested in animals. Probably because I never spent time with a pet at home, I was always uncomfortable around pets. Cats, dogs, bald eagles, you name it, I act like a fool around it.

In July, at Annah’s insistence, we adopted Poppy, and I immediately became the embodiment of the “Dad who doesn’t want a dog in their life” meme. Poppy is 75% of my camera roll. She’s my work partner, my eating buddy, my lap-napper. Sure, she keeps trying to drink my milk, but we’re not all perfect.

So yes, in the span of four months, I have gone from never caring about animals to audibly going “awww” whenever I see a cat. Poppy has made me care about Milo the Bookstore Cat. And I am going to steal Milo the Bookstore Cat like he’s the Declaration of Independence and I’m Nicolas Cage.

Speaking of Milo the Bookstore Cat, tomorrow, I’m going to do something that everyone warns against: I’m going to judge a book by it’s cover. Multiple books, in fact. That’s what covers are for! 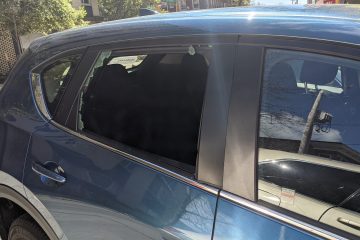 So, someone smashed out my car window last night. They didn't take anything, there wasn't anything to take in there anyway, other than I guess my peace of mind. The car runs fine, the window is going to get fixed, and really the only lasting damage will be to my wallet. I did tape up the window with plastic wrap in an attempt to do some DIY repairs to the car, but that all but dissolved while driving on the highway.